The following article is part of a series on the "SedentaryMood Study".

Preparations to determine the body position

As part of the "SedentaryMood Study," the Move 3 activity sensor was used for the first time to capture sedentary behavior as a primary target variable. Thus, some preparatory work was necessary in the run-up to the study. These were aimed primarily at the detection of the body position.

In order to determine the most suitable carrying position for the activity sensor and thus to differentiate between sitting and upright body positions, two video studies were carried out. On the one hand in everyday life with different activities and body positions and on the other hand during office work in everyday working life. 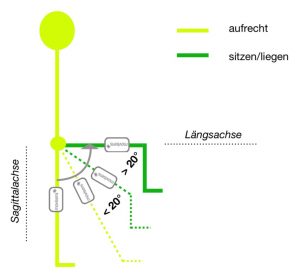 As the measured data of the activity sensor Move 3 analyzed, coupled with the e-Diary movisensXS and triggered with the SensorTrigger you will learn in the next article ...

From the 10th to the 12th of May 2018, movisens heads to the Symposium of the professions of "Clinical Psychology and Psychotherapy" to take part as an exhibitor. The University Koblenz-Laundau brings together the conference at the Landau campus, presented with the title "Psychotherapy - Multifaceted and Neverending".*

Participants can look forward to exciting keynotes from prominent speakers, including by Prof. Dr. Jutta Joormann from Yale University. In the intervals between interesting discussions, lectures, and presentations, we'd be delighted if you drop by our stand to have a chat with us about your research, and discover how movisens technology might provide an ideal solution for your work.
* - "Psychotherapie - Vielschichtig und Lebensspanne(nd)"